There’s not much better than waking up in a travel trailer, away from home, and looking out of the window into the great outdoors. With travel trailers and RVs becoming even more popular with every year, it’s not surprising that motorhome adventures are the new 5-star hotels.

However, if you’re planning on embarking on your own travel trailer vacation, you need to know how to fix basic troubles with the vehicle in case you run into any issues. To ensure that your travel trailer remains in top condition, you should check the mechanisms every time you’re about to take it out.

Travel trailers are larger than other vehicles and they don’t look anything like an average car from beneath. So, you need to learn how to service a trailer properly. Before that; however, you need to know how to properly jack up a travel trailer.

Whether you’re changing a tire or need to take a long look underneath the trailer, there are a few different methods of jacking up a travel trailer, which we’ll be talking about below.

A bottle jack is a jack that mimics the shape of a bottle. The ram protrudes from the jack vertically and you use the jack by pumping it up, producing a hydraulic pressure to the jack which then helps to lift the travel trailer up.

Bottle jacks, such as the Torin BIG RED bottle jack, are great for travel trailers. 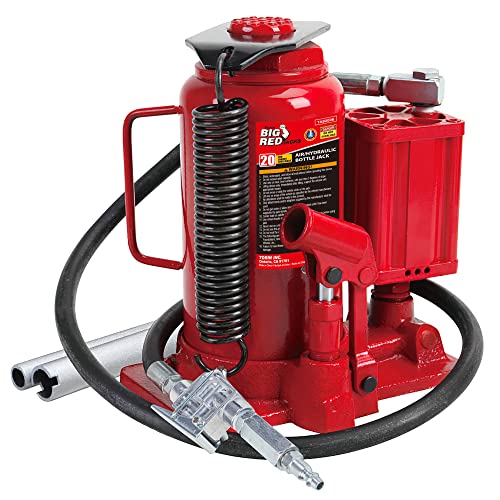 To use a bottle jack on your travel trailer, simply place the jack underneath the frame near the axle that you want to lift. Make sure that the jack is on the frame rather than the axle or axle tube as this is much easier to break and can cause major issues down the road.

To avoid leaving your travel trailer up in the air for too long, make sure that you loosen the nuts on the tire before jacking it up so that there isn’t as much work to do while the jack is in place.

To use the bottle jack once it’s been placed underneath the frame, simply crank the handle by pushing and pulling the lever. Continue to do this until the travel trailer is positioned off of the ground enough to do whatever you need to do.

Floor jacks are easier to use than bottle jacks and they also get the job done quicker, as well. Floor jacks, such as the 3-Ton Floor Jack, offer a longer base which offers the travel trailer more stability as it’s lifting it up.

However, floor jacks cannot hold as much weight as bottle jacks which are not always ideal for travel trailers.

The floor jacks can also be used for supporting the axle once it is off the ground. They will also let you move the axle around if needed (like we did on a recent suspension repair). 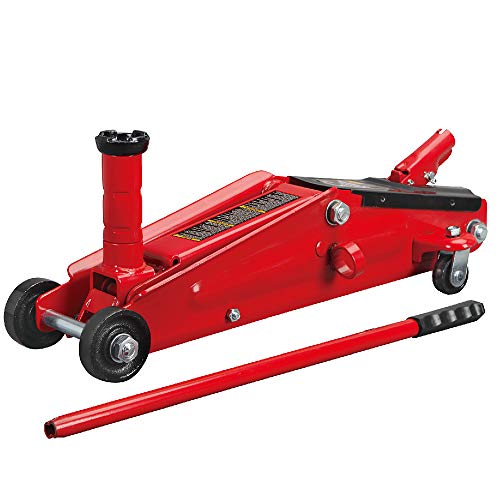 The need for jack stands will be more imminent for floor jacks than bottle jacks, so the type of jack you opt for will depend on the weight of your travel trailer and whether or not you want to use jack stands.

Jack stands don’t work to get the travel trailer off of the floor, but instead, they are used after you’ve used either a bottle jack or a floor jack.

Once you’ve lifted the travel trailer off of the floor, you should use jack stands to support the weight of the camper. Make sure they are rated for at least half the weight of your camper!

You can purchase jack stands in different sizes, but we think that a 6-ton option is best for jack stands. For example, the Torin 6-ton jack stands are an excellent option and you can buy them in pairs. 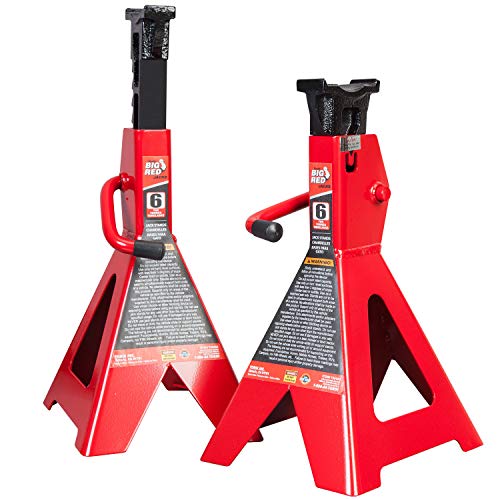 Using jack stands as support alongside the jacks will be a much safer method of jacking up your travel trailer.

Again, make sure these are only placed under the FRAME of the RV, and not the axle. This will avoid damage to the axle, and make sure the trailer stays off the ground!

Steps on How to Jack Up a Travel Trailer

Once you decide which jack you want to use, make sure that you purchase one with the correct weight limit to avoid injury.

Park your travel trailer on the flattest surface possible to, again, avoid injury.

Place the chocks against the tires so that your travel trailer remains in one place.

Make sure that the jack is as flat as it will go and place it below the frame located near the wheel that you need to change.

Alternatively, if you need to jack the entire trailer off of the ground you will want to place at least 4 jacks under the 4 equal, opposite sides of the trailer. Then support further with jack stands.

Pump up the jack to the desired height. If you’re changing a tire you only need to lift the travel trailer up high enough to pull off the tire.

If you need to get underneath the trailer and look underneath, jack the vehicle up as high as you need it.

Once you’ve jacked the trailer up to the right height that you need, put a jack stand next to the jack.

Secure the jack stand and once you’re happy that it’s stable, you can release the jack and remove it from underneath the travel trailer.

We hope that you’ve learned something interesting about how to jack up a travel trailer.

Jacking up a travel trailer is not much more difficult than doing so on a car or another vehicle, but trailers are almost always heavier.

This means that you’re going to need some reinforcements, such as high-quality jack stands, and you need to choose the correct jack type.

No matter what your decision, make sure that you opt for a jack that has a maximum weight limit that exceeds the weight of your trailer.